All About Paw Preference in Dogs 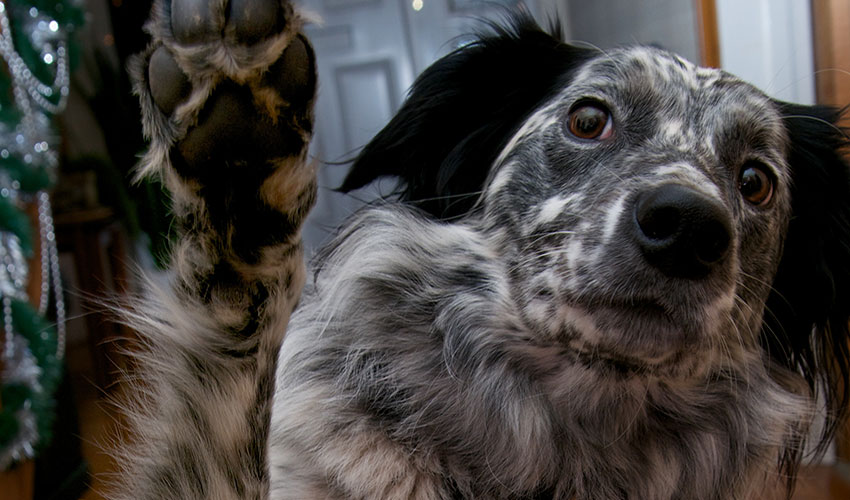 Is your dog left-pawed or right-pawed, or does she show any paw preference at all? And what does it mean if she shows a preference for using one paw over another?

Interestingly enough, dogs and many other animals are are right- or left-pawed, and many are also ambidextrous. While numerous studies have been conducted looking for gender and breed differences in terms of ‘pawedness’ in dogs, most studies show varying results with perhaps more that show male dogs have a left paw preference. On a related note, a 2009 study from the School of Psychology, Queen’s University Belfast found that female cats showed a greater preference for using their right paws while males were more inclined to use their left paws.

How do you determine your dog’s paw preference?

If you are right-handed, you may perceive your dog to be left-handed since he or she mirrors your actions – for instance, when you ask for a paw to shake. Below are a number of ways paw preference is commonly determined. Use one or more of these methods to test your pup and repeat the tests to look for patterns.

See the video a Woof Report reader created in response to this post. It will make you want to test your dog and besides, Ellie Mae in the video is adorable and such a trooper for putting up with the scotch tape test!

Research studies being conducted now and in the past, have connected paw preference with certain behaviors and temperaments. For instance, a 2006 University of New England study from Dr. Nick Branson found the way dogs use their paws may be a sign of how they react to noise. More specifically, findings revealed ambidextrous dogs (those without a paw preference) are likely to be more reactive to noise such as thunderstorms and fireworks

According to Branson, “It seems possible that dogs that do not favor one side or the other may be prone to experience intense emotional responses to a broad range of stimuli. Animals with lateralized functions may be able to transfer attention from disturbing stimulus more successfully.”

Branson adds this research may help save time and money in training working dogs for sniffing and bomb detection work since fear of noise is a common reason why dogs are rejected from such programs. Trainers will be able to select the most suitable dogs for specific jobs using paw preference as an indicator.

According to Dr. Paul McGreevy, an animal behavior expert at University of Sydney’s Faculty of Veterinary Science and another expert on the topic, the use of such predictors can also save time and money when it comes to training guide dogs. With only about half of guide dogs passing training programs successfully, resources can be allocated to dogs with the highest probability for success.

For more on this interesting topic, explore the links below. And don’t forget to put your dog through the simple tests to determine his or her paw preference!

Read the interview with Dr. Paul McGreevy, “How much of a successful working dog’s behavior is linked to being left or right-pawed?”
www.abc.net.au/interview

Thank you to stuart-dootson on flickr for the photo of beautiful Rosie.