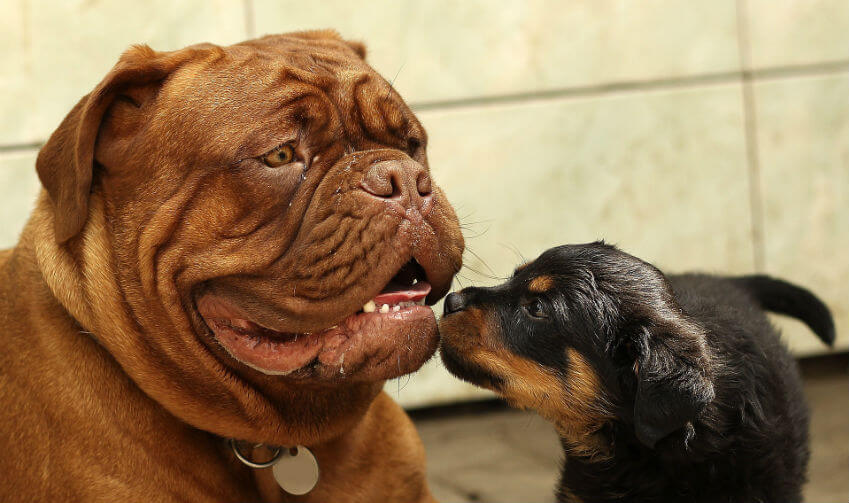 How in the world can there be so many sizes and shapes of dogs in a single species? Read on to understand how and why nearly 400 dog breeds exist today.

Have you ever wondered how our dog friends can appear in so many different shapes and sizes? Unlike most other species, the canis familiaris (that’s dog to us) can turn out Great Danes and tiny teacup Yorkies all under the same genetic category. To get the straight story on how and why, let’s step back into our school days to refresh some animal science facts.

Natural selection, which contributes to the diversity in any species, does influence certain features in dogs to help them adapt to their environment. For example, dogs adapting to colder climates may get thicker fur and bigger frames. But, the huge variety of dog shapes and sizes is believed to be the direct result of artificial selection, or in this case, the human involvement in the breeding process. “You never get that kind of variation in wild populations,” says animal behaviorist James Serpell of the University of Pennsylvania.

Breeding for Appearance: the Game Changer

And since humans started breeding dogs for appearance with the advent of Kennel Clubs in the 1800s, the sheer variety of dog shapes, sizes and colors skyrocketed. In fact, most of all of the nearly 400 recognizable breeds we know today were first introduced after 1850. This is significant because evidence of the human/dog bond spans over some 10,000 to 40, 000 year (this wide range is due to findings from various studies aimed at pinpointing timing; a 2017 study shows domestication was 30,000-40,000 years ago). But it’s not until purebred dogs became status symbols that humans actively worked to change and shape their appearance. For thousands of years before, dogs were only bred for skills like running after prey, hunting rodents and fetching game.

It was not until the mid-1850’s that purebred dogs became status symbols that humans actively worked to change and shape their appearance. For thousands of years before, dogs were only bred for skills like running after prey, hunting rodents and fetching game.

Another contributing factor to the variety of dog shapes and sizes that dogs’ bodies, particularly their skulls, undergo a major transformation between newborn and adult years. Dogs’ skulls grow in width and length at different rates (unlike kittens, for instance, whose skulls are at adult proportion when they are born). This allowed breeders to toy with the timing of nasal growth and other stages of development.

But why do dogs morph so easily into such a variety of shapes and sizes? “I don’t know of anyone who can answer that question,” says Serpell.  Some aspects of the dog genome are still a bit of a mystery

The link below gives the best summary of this interesting phenomenon.
www.pbs.org/dogs