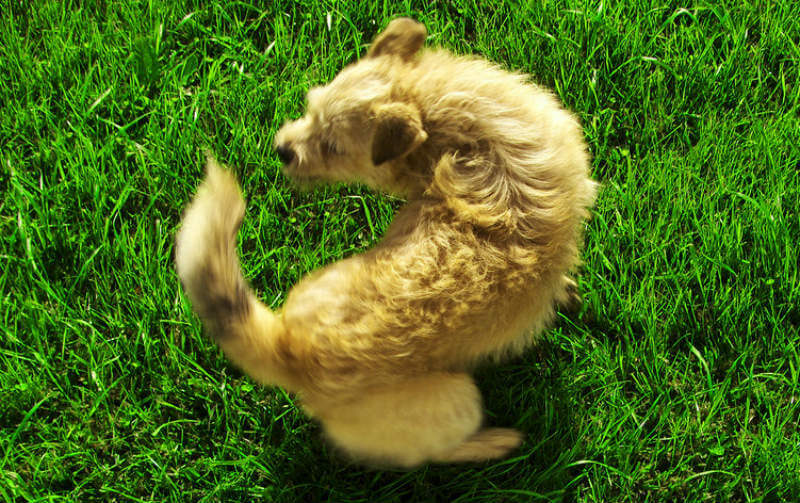 We’ve all seen dogs chase their tails. It’s adorable but why do they do it? Read on to find out and learn about a study that links tail chasing in dogs to high cholesterol.

It’s hilarious to watch. So simple and utterly predictable, a tail-chasing dog is widely entertaining. At some point, most dogs engage in this losing game. “This is usually just a puppy thing that happens when young pups discover they have a tail,” says Director of Communication for the American Kennel Club (AKC), Lisa Peterson to Discovery News. But some dogs never quite grow out of the sport. A new study published in the March issue Journal of Small Animal Practice offers behavioral and physical explanations for this futile canine pursuit.

Clinicians site a number of reasons for tail-chasing in dogs, the most obvious being boredom. A dog sees his tail moving at the edge of his line of vision and it’s game on. With nothing more interesting to amuse him, the chase looks fun. And the fact that his tail is attached to his body doesn’t really factor into the equation. Dogs also know that people find tail-chasing irresistible. So to get our attention, and keep our eyes fixed on their fuzzy selves, dogs may chase their tails just for us. Dogs may also chase their tails because there is physical discomfort of some type, for instance, he’s itchy, has fleas, or is having anal gland problems. But some tail chasing behaviors stem from physiological reasons too.

A study conducted by Turkey’s University of Uludag Veterinary Medicine team found a surprising correlation between high cholesterol and compulsive canine tail-chasing. The results show that high cholesterol may be an indicator for obsessive-compulsive disorder in dogs. To explore this connection, researchers sampled blood from 15 healthy compulsive tail-chasers and 15 dogs that rarely chase their tails. The results showed that tail-chasers had significantly higher HDL and LDL cholesterol numbers than the control group dogs. The researchers speculate that the high cholesterol levels clog cell membranes at the microscopic level that may restrict the flow of serotonin and other brain hormones that influence mood and behavior. The results also showed a higher incidence of tail-chasing among female dogs, though researchers do yet understand why.

The AKC’s Lisa Peterson told Discovery News “It’s an interesting hypothesis, especially as we don’t usually test for cholesterol in dogs.” Since dogs and humans process cholesterol differently, dogs are not as likely to experience the related human health problems of clogged arteries or heart attack. So serum lipid levels and blood pressure are not part of the standard veterinary wellness exams for dogs.

The study team also noted that fits of tail-chasing can occur after dogs endure surgery, illness or physical trauma. So it’s up to dog people to keep on eye on that tail. If your dog suddenly can’t get enough of it, make sure to bring it up with your vet. There are many reasons for the fascination. Your dog could just be biting at tail fleas, or better yet, just passing the time until a Frisbee sails past his nose.

Read more about the study and yet another that explains a dog’s tail chasing is linked to OCD-like behavior.

Thank you to Luis for the photo.

Originally published May 2011; reviewed and updated May 2016.