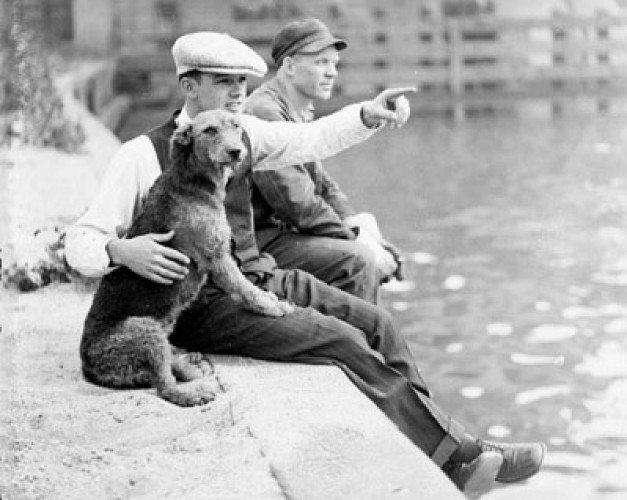 Look to top dog names in the early 1900s for ideas on naming your dog, and to step back in time and see how dogs were just as beloved back then.

Oh how our pet’s names have changed! There was nary a single dog named Buddy, Max, Lucy or Molly around the year 1900, or at least that’s what we can deduce based on dog license books from city of Bakersfield, California.

In an interesting article in the May 2011 issue of Dog Fancy magazine, Sarah Woodman, public program manager at the Kern County Museum and author of Traditional Tails: Portraits of Kern County Pets and Their People, reveals the top 10 dog names in Bakersfield in the early 1900s, which are listed below.

The names were compiled from dog license books from the years 1898, 1900 and 1901, which were donated to the Kern County Museum. Apparently, the city of Bakersfield required that all dogs in the city be licensed and tagged for a fee of $2, (equal to around $50 in today’s times). And while these records now provide us with a look at dogs and their people in the past, they also show that people valued their dogs since they were willing to pay the licensing fee.

The dog license books list the dog owners’ names, dog descriptions, and dog names for around 340 individual dogs, with 428 entries in all since dogs had to be licensed each year.

What breed is brown dog?

While some dog breeds are listed, many dogs are simply described by their appearance, for instance, ‘small yellow dog,’ ‘white with brown spots,’ ‘brown dog,’ and you can see a good number of owners have more than one dog. According to Woodman, “dogs were owned by a wide range of people, from saloon owners to bank tellers to madams to doctors and everyone in between – it seems that everyone in Bakersfield had a dog.”

Pet names in past times are fascinating because you can observe the relationship and even the history of the times from them. For instance, there are cute names like Wags, Babe, Lady, Sunshine, and Cutie that infer these dogs were much dear to the owners’ hearts. There are also names that reflected the times, specifically a dog named Grover and another with the name Grover Cleveland, the name of 22nd and 24th President of the United States who served in 1885–1889 and 1893–1897. Woodman points out that there was a literary connection in the naming of many dogs too. Charles Dickens’ 1850 novel David Copperfield featured a dog named Jip (which is in the top 10), and dogs were named  Nemo, the name of the captain in Jules Verne’s 20,000 Leagues Under the Sea, published 1870; there’s also a Jim (Huckleberry Finn) and Crusoe (Robinson Crusoe).

Since you think of names like Rover and Spot when you consider dog names in years’ past, it’s only fitting to add that there are just two dogs with the names Rover and Spot in the books, and only one with the name Fido – fewer of each than one would expect!

The Kern County Museum website previously included Sarah Woodman’s article about Bakersfield Dog Registration Books and with pages from the City of Bakersfield Dog License Books for 1898, 1900, and 1901; however, it’s no longer on the site.

Another source offering insight into dogs of the past are AKC stud guides from the late 1900s – an interesting read!
www.bestinshowdaily.com

See Woof Report’s past tip with the top pet names and tips for naming a new pet.
www.woofreport.com/pet-names

Fans of vintage dog photos will love the book Photobooth Dogs, from Cameron Woo, co-founder and publisher of The Bark magazine. This fun book features clearly beloved pets in more than 100 portraits taken in photobooths over the last 80 years.
www.amazon.com/photobooth-dogs

Thank you to Foxtongue on flickr for the photo.