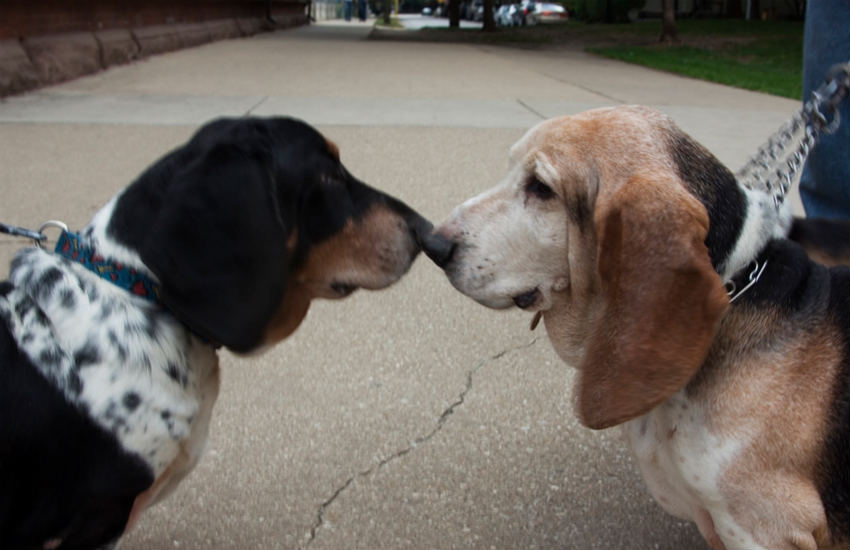 We’ve all heard about a dog’s mighty nose, but there’s more to it. Dogs use their amazing sense of smell to sniff other pups’ breath in order to find food.

Of all the places dogs love to sniff, the snout of another dog is by far the least offensive. Dogs live to breath in a hearty whiff of a fellow pup’s breath. Just the thought of it makes their mouths water. That’s because dogs pick up more than halitosis in single sniff.

A study in the journal Animal Behaviour suggests that by smelling the breath of other dogs, canines learn where to find food. “They’re scavengers,” says Clive Wynne, a psychologist at the University of Florida in Gainesville. “It would seem to be advantageous for them to pay attention to where another dog finds a tidbit and go after it.” And thanks to the all-powerful canine nose, it’s actually possible. With super sniffers programmed for scent identification, it’s estimated that our doggie friends can identify scents 1,000 to 10,000 times better than us. So humans, don’t try the breath sniff at your home or office. You’re not likely to find lunch or new friends in the process.

Dogs Aren’t the Only Ones

As it turns out, dogs aren’t the only mammals that use scents or sounds to direct others to food. Chimpanzees tap fellow monkeys on the shoulder or shoot them the evil eye to lead them to goodies (or away, if they don’t want to share). Even rats, chickens, gerbils and honeybees spread the word when chow’s on. Honeybees are known to perform a “waggle dance” to invite hivemates in for nectar.

To test the dog’s sniff n’ scout abilities, Marianne Heberlein at the Institute of Zoology in Zurich set dogs out in search of hidden treats. All the dogs got a big hint first when Heberlein showed them the hiding place, so they always went to the same place. But some of the dogs were psyched out – when they arrived at the corner where the treats were hidden, nothing was there.

Next, the tricked and successful dogs where introduced to a second group of dogs who knew nothing about the whole hidden treat game. After sniffing each other’s snouts for a while, the second group set out to search for treats too. New Scientist magazine highlights the results. “If the first dog’s search for food had turned up nothing, the second dog showed no preference for any corner. However, in the trials where the first pooch found food, the second dog tended to visit that corner first – especially if the dog had caught a whiff of the other’s breath.” In other words, the study suggests that the second dog’s search was driven by the smell of the first dog’s breath (further proof that anything that stinky must have a purpose).

For more details on the study, read the full article at New Scientist
www.newscientist.com/snoutsniff

Thank you to Robert L. Segal for the photo.