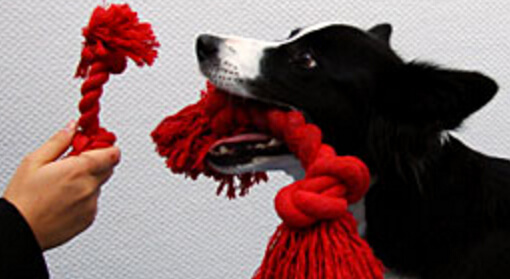 Dogs tend to know what we want. That’s just one of the benefits of evolving aside humans over time. In fact, biological psychologist Juliane Kaminski proposes, “Dogs evolved a feel for how people communicate as a result of living in human settlements for thousands of years.” Her new study from Max Planck Institute for Evolutionary Anthropology in Leipzig shows that dogs can actually grasp subtle references in human communication.

For this important scientific information, we have the adorable Border Collie to thank. Researcher Juliane Kaminski asked Border Collie owners to present their dogs with a full-size or miniature replica of a rope toy (or in some cases, just a photograph of one), followed by the command “Bring it here.” The dogs were then taken to an adjoining room where they searched for the toy among other toys. Three of the dogs that had already been trained to fetch brought back the correct toy right away. Two of the dogs that didn’t know how to fetch got the request right with little practice. “The most reasonable interpretation of dogs’ success in the replica tasks is that they understood that by showing a replica, a human was trying to communicate something to them,” Kaminski says.

Juliane Kaminski, Sarah Marshall-Pescini’s book, The Social Dog: Behavior and Cognition (2014), digs deeper into dog’s cognition and explains this specific study suggests dog comprehend our communicative intention. Holding up a replica is meaningless to a dog, but the dogs understood the human was trying to communicate to them that they should fetch the matching object. Overall, this demonstrates dogs have a flexible understanding of human’ communicative intentions.

Past studies of a similar nature show that chimps, dolphins and other non-human animals struggle with retrieving replicas. So it’s no wonder dogs evolved into our best friends. They just know what we want, even if we sometimes don’t express it clearly. Aren’t we lucky to have a friend like that?

The study will be released in an upcoming issue of Developmental Science. In the meantime, learn more from the web edition of Science News.
www.sciencenews.org/fetchingstudy