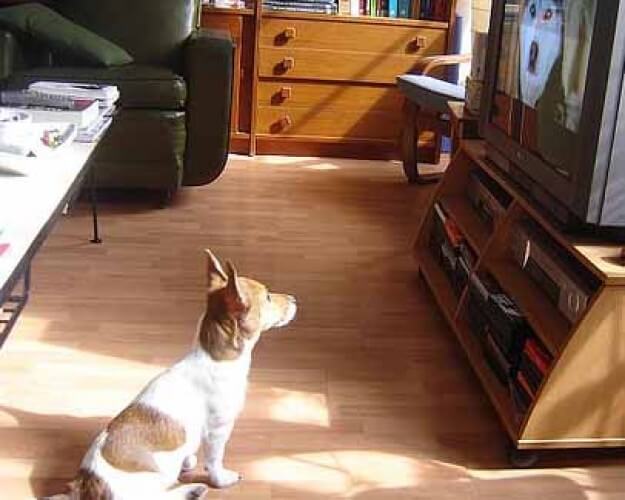 Have you ever heard of dogs watching TV? Did you even know this was possible? Believe it or not, DOGTV delivers your dog’s own cable station.

Now you and your dog will need to vie for the remote control as well as for the prime spot on the couch. That’s right – your dog wants to channel surf. Actually, she just wants to choose one channel: DOGTV. DOGTV is cable’s first 24/7 cable television network created specifically for dogs to view.

According to the creators, programming is scientifically developed with a dog’s sense of vision, movement detection and hearing in mind. For instance, the colors are different to adjust to dog’s adjusted for dog’s vision and sounds are more appealing to dogs. And the content’s benefits were tested with dogs, dog owners, vets, dog trainers and other experts.

The concept and specific content was created to provide companionship and entertainment for dogs when they’re left alone at home. According to the folks behind DOGTV, there are three specific types of programming, and most are viewed from the dog’s perspective – and you can see samples of each on their YouTube channel.

It’s not surprising that such a channel was developed. The number of households with dogs continues to increase, and our dogs are family – of course, we want them entertained if we’re at work all day. This leads us to the big question…

Woof Reporter Larry does not watch TV (unless he does and he’s been successful at hiding it from me) but according to Dr. Nicholas H. Dodman, BVMS, MRCVS, a veterinarian specializing in animal behavior, and a widely respected expert on pet health and behavior, says dogs do watch TV.

Dodman is one of the scientists behind DOGTV, and states “The answer is yes! Dogs respond to what they see and hear on TV, and enjoy TV the most when they see other dogs, other animals, and even inanimate moving objects,” says Dodman. He adds that dogs can see everything on the screen as clear as we do, and they do watch and can be entertained by it. Dodman adds pet owners should not expect their dogs to sit on the couch and watch but will feel better in the company of television.

Other experts disagree and believe dogs sleep when they’re home alone, and can be equally comforted with music, and entertained with puzzle treats and such.

What do you think? Would your dog watch and would you turn on the channel for your pup? Below is a sample of DOGTV content.

DOGTV is available on Xfinity and DirectTV for $4.99 per month and is also available streaming online via Roku, Apple TV and other applications.

Thank you to dominiqueb on flickr for the photo.