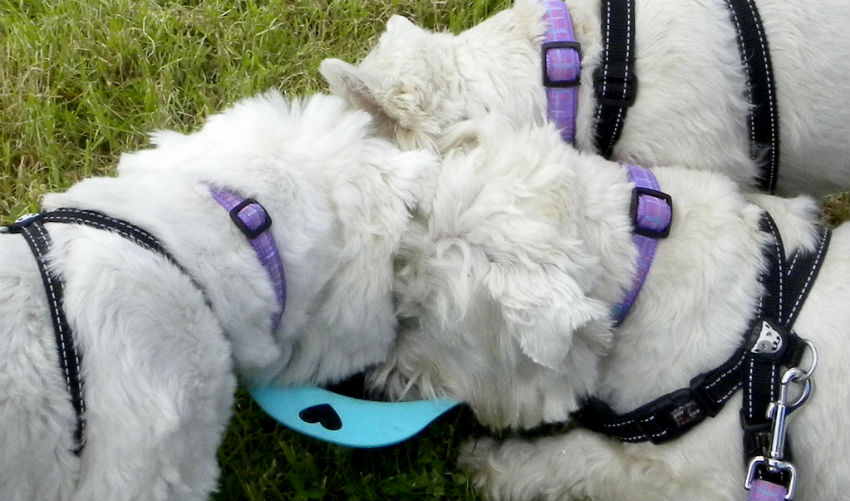 Have you heard of canine bloat? Read on to find out what causes bloat in dogs, how to prevent it, and to learn if your dog is susceptible.

Canine Bloat: It doesn’t sound like anything to worry about, but this life-threatening condition deserves our full attention. Officially known as Gastric Dilatation-Volvulus (GDV), it’s a condition that requires emergency treatment since a dog can die from it within several hours.

Commonly referred to as “bloat,” it occurs for not one particular reason and sometimes unknown reasons, when a dog’s stomach fills with air, applying pressure on the diaphragm and other organs. This makes it especially difficult for the dog to breathe and compresses the abdominal veins restricting blood flow to the heart. And filled with air, the stomach can easily rotate. Once the volvulus (or rotation) starts, the blood supply is cut off, the stomach tissue dies, and the dog’s condition deteriorates rapidly. Fortunately, some dogs survive GDV with proper and urgent treatment, and there are preventative measures to take to avoid it. Here are some things to consider, thanks to Holly Nash, DVM, MS from the peteducation.com website from Drs. Foster & Smith.

Which Dogs Get GDV?

Studies show that larger breed dogs with deep, narrow chests are much more likely to experience GDV than smaller breeds. For example, according to a University of Purdue study of hundreds of dogs that had developed GDV, the Great Dane is 41.4 times more likely to develop GDV than a mixed breed dog. In addition to breed, genetics also play a role. For instance, if both parents have especially deep, narrow chests, they pass on this body type to their puppies, resulting in potential GDV problems later in life. Older male dogs, over age 7, are twice as likely to experience GDV than females, whether they’ve been neutered or not. Eating habits and temperament also factor in. Dogs who eat rapidly, exercise soon after eating and/or eat just once a day are at increased risk, as are dogs that tend to be nervous, anxious or fearful.

What are the Signs of GDV?

Dogs with GDV show obvious signs of distress such as a bloated, swollen belly, retching, and dry heaving. Other signs include rapid shallow breathing, restlessness, and if volvulus occurs, the dog may go into shock, have a weak pulse, rapid heart rate and eventually collapse. Immediate surgery is necessary to save a dog’s life.

How Can GDV be Prevented?

Because of genetic factors involved with the disease, a dog may still develop GDV although preventative actions are taken, so owners of susceptible breeds should be particularly aware of warning signs. Preventative measures include feeding your dog two or three times daily, rather than one large meal once a day, and limiting your dog’s water intake immediately after eating. Also avoid vigorous exercise, excitement, and stress one hour before and two hours after meals.

For more information about bloat in dogs, visit the Drs. Foster & Smith Pet Education site. Their useful article includes a University of Purdue reference chart listing the ratio of the likelihood of a particular breed developing bloat as compared to a mixed breed dog.
www.peteducation.com/bloat

Find a selection of dog food bowls to slow your dog’s dining at amazon: amazon/dog-bowls.