Top Dogs of the Week

Meet the sweeties featured in our weekly email newsletters

Each week, one lucky dog is selected as our Top Dog of the Week and prominently featured in our weekly Woof Report newsletter, and on our website and Instagram page.

Share a photo of your dog with us and he or she may be featured! Tell us your dog’s name and a little about your pup, and note landscape/horizontal photos work best for our newsletter. Send the photo and details to woof (at) woofreport.com or use the hashtag #woofreport to share a photo on Instagram.

See more fabulous friends from years ago in our Woof Report Friends Gallery. 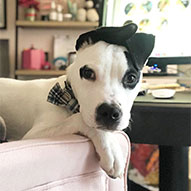 Meet Archie from Minneapolis! Could he be any cuter? And those ears! This sweetheart is available for adoption from Save a Bull of Minnesota. He’s in foster care for now, but check with the rescue group to learn more. Follow along @saveabullmn and see more photos of Archie @prettynantastic. 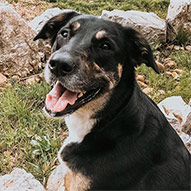 It’s Willow from Northern California, a 2-year-old rescue pup with the sweetest face! She more of this cutie at @woof_its_willow_ 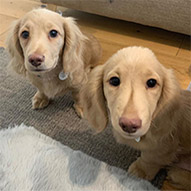 Meet Simba and Buzz, adorable Miniature Dachshund siblings from London. You can see more of these sweethearts @BuzzandSimba. 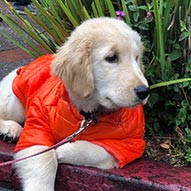 Meet adorable Buttercup from the SF Bay Area. She’s just a young pup and recently joined her family, which includes another Golden! She is too cute in her jacket! 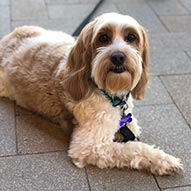 Meet Josie from Santa Monica, who like most LA natives loves sunshine and the beach. She’ll turn 4 this June! 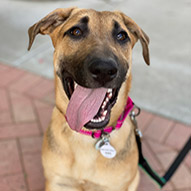 Meet Lilo, a beautiful 6-month-old German Shepherd mix seeking her forever home in Northern California and beyond. Lilo is all puppy, tail wags, and kisses to her humans and an active, smart girl. Could she be the pup for you? We hope so! She sounds absolutely wonderful! She’s a littermate to Luce and Tala, who are available for adoption, too.

Learn more about Lilo and her sisters at Shep Heroes. 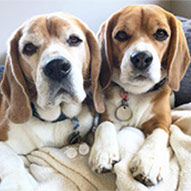 These adorable Beagles are actual siblings from different litters and reside in Los Angeles. They have identical markings, but different personalities — and different taste buds! Kobe is named after the Japanese Black Cattle and Jidori (Dori for short) after the free-range chicken. See these sweeties on Instagram @kobe_jidori. 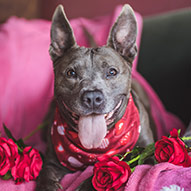 Sweetheart Harlequin is an absolute beauty and looking for her forever home in the Los Angeles area. You can find this 6-year old pup at Rockin Rescue in Woodland Hills and she has been there for four years! She was rescued and her puppies all found homes and sadly she’s been overlooked. Is she the dog for you or perhaps you’d like to take her on an outing or have her over for a sleepover? She gentle, affectionate, and playful. Learn more about here here and see her videos! 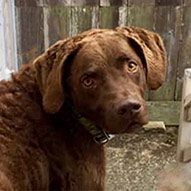 Lincoln is an 8-year-old Chesapeake Bay Retriever. He’s a champion swimmer – loves the sun, surf and apples, and snuggling with his owner Fiona when it’s cold (even with his double layer of insulation)! 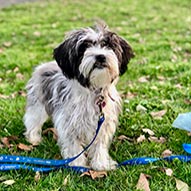 Rosie is a little sweetheart who lives in the SF Bay Area and was adopted just recently from Hopalong Rescue. She’s about a year old and shares her home with a dog named Mickey and two human siblings. This friendly girl loves hanging out at the park meeting dogs and people! 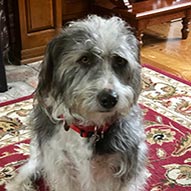 Charley is a 7-year-old Bearded Collie mix. He was adopted a year ago from Foxy and The Hounds Rescue in Los Angeles. He’s very intelligent and a loving companion.  He loves to go on walks and likes all the people he meets but he barks at all the other dogs on the street.  He’s a great best friend and a very handsome boy! 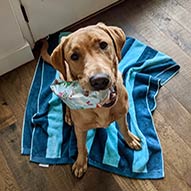 Meet handsome Zeke, an 8-month old Labrador who enjoys both sunshine and snow in his hometown of Arizona. Zeke is super smart and a true water dog – he loves nothing more than a dip (or a few) in the pool on a hot day. 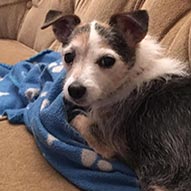 Sweet Ginger turned 12 on November 29th and she’s Chihuahua/ Jack Russell mix. Could she be any cuter? 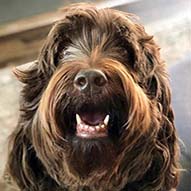 Babka is a fabulous Labradoodle sweetheart. He is a beloved family member who loves walks and snuggling on the couch — and he protects the neighborhood from errant bike riders. 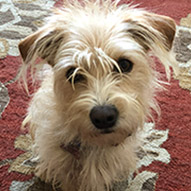 This is Jimmy…our 15-month-old mixed breed rescue dog.  He is the most exuberant dog I’ve ever known and if he could play 24/7 I know he would.  He’s affectionate and loves his toys and bully springs. 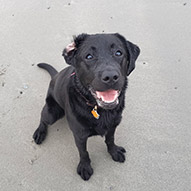 Phinley is a 3 and 1/2-year-old black lab, and as you can see, she absolutely loved her first trip to the ocean. We watched the sunrise over the ocean’s waves, and her exuberance couldn’t be contained. Granted, I don’t think it was the sunrise she was excited about, but the freedom, the water, and the opportunity to race around after her Orbee Tough. 🙂 She is my best friend, my sidekick, and my reason for smiling. 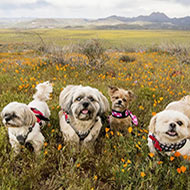 The Livin’ the Crazy crew are four fluffy rescues with heart and love to spare. Based in Chandler, Arizona, they spend the majority of their time making people smile either in person at vendor/community events or on their social media sites. They love to camp, hike, stand-up paddleboard (some more than others), learn tricks, pose for pictures and snuggle with their Mom — of course! They are HUGE rescue advocates, believing that the perfect dog for every family already exists in a shelter, they’re just waiting for you.

Want to meet the Crazies? Read on and find them on Instagram @livinthecrazy.

At eight, Murphy is the most senior of the group. He was found wandering the streets of Mesa and came into Friends for Life Animal Rescue matted, emaciated and grumpy. He’s significantly less grumpy these days and tells us that his favorite activity in the world is the lure course (when his arthritis allows), and his LEAST favorite thing in the world is COLD. He really hates being cold.

Sonny is the most recent permanent addition to the Livin’ the Crazy family, though he’s been in and out of foster with them since 2015. He’s a seven-year-old Shih-Tzu that turned up at the Yuma Humane Society with a severe eye injury. They removed the eye when they did his neuter, and he fostered with Livin’ the Crazy as he healed, and then again in 2018. In 2019 he found himself back at the rescue and running out of options, so the Crazies welcomed him back with open arms. He just couldn’t figure out why they kept sending him away to new families, but he’s sooo happy that their Mom finally signed the paperwork to keep him forever. His favorite thing in the world is his Mom, and his least favorite thing is being away from Mom. He’s a simple dog.

Oliva (Liv) is the only female Crazy, and as such, she is a perfect diva. She is a six-year-old, six-pound Shih-Tzu/Yorkie/Maltese blend, and she is as sweet as she is adorable. She and her littermate sister (Sparkle) were found in Gilbert, terrified, matted and covered in ticks. She has grown into a confident, brave, and fun-loving pup- and is the pup that most often goes places with Mom. When we asked her why her and not the boys, she shrugged and said: “I’m small and easy!” Her favorite thing in the world is her flat squeaky Dollar Store pig. Her least favorite things in the world are windshield wipers. They’re scary!

Last, but certainly not least, is Enzo. Enzo is a five-year-old “All American” mutt, which simply means they don’t have any clue what his blend is. When people ask him “what he is”, his impish reply is “I’m loved!” Truer words have never been spoken. He was another Yuma pup that made his way to Friends for Life at the tender age of nine months. Enzo’s favorite thing in the world is Olivia, and his least favorite thing in the world is a delayed meal.

Many have asked why they’re called the Crazies and their response is “We’re crazy about rescues, crazy about each other, and crazy about living our best life! We believe everybody should be just a little (ok, maybe a lot) crazy about their furkids, and not be afraid to flaunt it. Live the Crazy!” 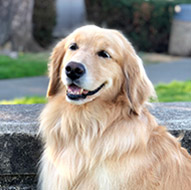 Honey is a gentle sweetheart who resides in the SF Bay Area. She was rescued and joined a family complete with two human siblings and two Siberian cats — and they all adore her! Honey has earned her Canine Good Citizen and is training to become a therapy dog. 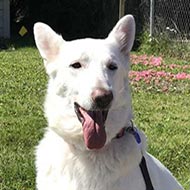 Beautiful Molly is a German Shepherd seeking her forever home in Northern California and beyond. She’s a happy girl who loves people, belly rubs, walks, and her foster brothers and sister. She’s about 10 years old, but don’t let that fool you because she’s still full of energy! Could she be the dog for you? We hope so!
Learn more about Molly at Shep Heroes. 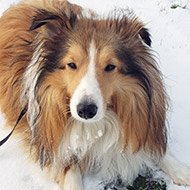 Meet Gavin, a beloved Shetland Sheepdog born in January 2017. He is an adventurous pup who has enjoyed the Karen Pryor Clicker Academy, a Nosework class, Agility Foundations, and even sheep herding! He is a sweet, sensitive soul and loves to play with friendly dogs and to chase sticks in the river. 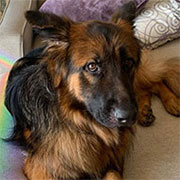 Handsome Buddy was adopted from Westside German Shepherd Rescue in Los Angeles. He is a good boy who has found his forever home! 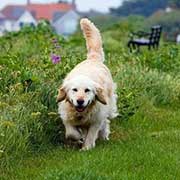 Sugar is the most friendly dog you will find — always ready to go and happy to be by your side. Her favorite treat is potato chips but we just give her a few each week! 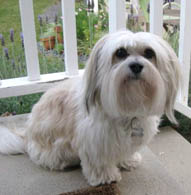 Lola is a 13-year old Havanese sweetheart residing in Tarzana, CA. She loves to snuggle on the couch with her people or staunchly protects the house from squirrels and other critters.